When I flew home last week, my mom reported how many views my TED talk had received and asked me if anyone recognized me on the plane. Ha. When I got back to town and told my chiropractor I had the worst seat on the plane (last row, middle seat–the one that doesn’t recline at all) he said: “Don’t these people know who you are?” Ha ha.

If jokes really are benign violations (this is my favorite theory of humor–a field I wish I’d known existed when I was in school), then I guess the violation is that famous people are sometimes entitled jerks and the thing that makes it benign is that I’m not actually very famous. But here’s the thing I’m struggling with, the part of the joke that doesn’t feel so benign these days: I’m not totally unknown anymore. No, no one has ever recognized me in an airport or on the sidewalk, but I get e-mails from strangers almost daily. Some even use the phrase “I’m a big fan.” (fan!) I now have a public persona that extends beyond my classroom and my friends. And I’ve spent the past month–and the past nine months before that–trying to come to terms with this persona, trying, in short, to figure out how to be just a little bit famous.

In all the years I spent writing without an audience, I developed an idea of who I would be as a writer. I imagined I would publish a book with a small press and it would be read by a few thousand people if I was lucky. In the wildest versions of this fantasy, I would go to conferences and sit on panels with other essayists. (Seriously–this is still a career dream, so if anyone wants an enthiusiastic panelist: call me!)

I imagined that I could keep my writing life and my personal life separate, that I could be honest and fairly unfiltered about the people I wrote about because no one who knew those people would ever read my books. None of this is shaping up to be true.

I got the call that I was going to be featured as the TED talk of the day the same week that my partner and I were trying to decide if we should stay together or split up. I told myself that, even if my relationship was a mess, at least this career thing was going well. But imagine this: 500,000 strangers watching you talk about your choice to love someone while you are at home with the dog watching comedy specials on Netflix to ward off the crying and wondering if it’s time to make a different choice.

I believe in personal agency but I also believe you get what you get from the world and you have to figure out how to live with it. To complain about the things that come with this newfound success would be disingenuous–I like getting e-mails from strangers. I like getting new Twitter followers. I even liked getting trolled (getting trolled is shitty–I do not endorse it–but it felt validating for someone to notice my work enough to loathe it). 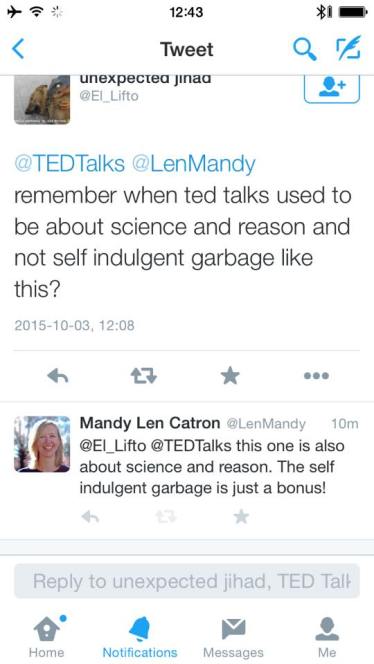 But these markers of success also make me uncomfortable. Those e-mails from strangers are sometimes difficult to respond to. People confess the most intimate details of their heartaches to me. END_OF_DOCUMENT_TOKEN_TO_BE_REPLACED