Last week I devoured all three of Lea Thau’s “Love Hurts” episodes in a single afternoon. Thau hosts the Strangers podcast, which I’d never heard of until a couple friends recommended it. Read this description and tell me you’re not curious:

Producer Lea Thau investigates why she’s single. She goes back to guys who didn’t want to date her in recent years and asks them why. From ages 15 to 38 Lea was never single, but since her fiancé left her while she was pregnant, finding love again has been hard these last few years. Is she too old? Is she too broken from that last big heartbreak? Is she too much this or not enough that? While looking for answers, the man she is dating disappears. This is the first installment in a series.

A fourth episode is due out tomorrow and I can’t wait. The series is, hands down, the most honest and straight-forward thing I’ve heard or read about online dating in particular and modern love in general. (Better, I’d add, than the Modern Love column, which I sometimes like but often find suffers from its 1500-1700 word limitation.)

I want to call Thau ballsy, but my feminist inclinations suggest I ought to find a better adjective. But that’s how these episodes feel: vulnerable and exposed—and that’s the biological reality of balls, isn’t it? Thau confronts romantic love—and, more specifically, romantic rejection—without worrying too much about justifying her own dating experience as a legitimate subject for discussion: I know that going back to guys who’ve turned me down, asking them, ‘Why not me?’ can seem so arrogant and whiny and self-involved and potentially aggressive, like, ‘How dare you not want to date me?’ but I hope it doesn’t come off that way.

The one thing Thau does that I’ve always avoided (on this platform at least) is talk about her experiences with dating as they’re happening. You could argue that it’s difficult to get much perspective that way, and the classically-trained essayist in me values perspective above all, but maybe there’s something to be said for reflecting on the dating process in real time. She perfectly captures the neurotic swing from sanity to anxiety that seems a requisite part of dating:

You feel joy…. You remember that before you met this guy, you’d finally come to a place where life felt really good, where you could let go of this idea that you had to meet someone now, and actually felt that your life was pretty awesome. Not just as a cover up like before but in a more genuine way. Finally. And you think, maybe there’s a way back there before too long, even if the first guy you kind of opened up to disappeared. Then two days go by and you think, “He still hasn’t fucking been in touch? Even just to wrap things up? He doesn’t even feel like he owes me that?”

I’ve made several good friends through online dating, but Thau’s experience is closer to what has been, for me, the reality of dating. You feel a strong connection with someone and then he disappears. Or you disappear. I have backed out of dates under the flimsiest of excuses. And I have learned the hard way that you must assume—no matter how explicitly someone declares their interest in you—that that person is actively dating other people, unless they’ve clearly said otherwise. It takes practice to learn to be kind and accountable in this process. But learning how to date with integrity has little to do with actually finding someone to love. (And more to do, perhaps, with finding your niche of furries or Pastafarians or Stevie Wonder Truthers.)

So then what about my dating life right now? About a month ago I stopped seeing someone. Because he decided to keep seeing someone else. It was a summer fling, I knew it was, but sometimes, when I stood at his balcony in my underwear and squinted out at the morning rain, it felt like it could become something more than that. But then summer ended and we stopped seeing each other and I kept thinking: what does it mean to be the one who isn’t chosen?

At my sister’s wedding, my aunts and uncles wanted to know why I didn’t bring a date. I told them it was because I was dating two guys (true) and I couldn’t choose between them (not true). We all laughed but the implicit question remained: what are you doing to keep yourself single?

It’s kind of like asking someone who is depressed why they don’t just cheer up already. Both questions assume a wrong state and a right state. And they imply that this wrongness is solve-able with the appropriate amount of willpower. I remember being pretty judgmental about my single friends’ dating lives when I was in a long-term relationship, saying, “He’s being too picky” or “She’s in such a rush to find someone.” But now I think simply: there are so many ways to love, so many versions of happiness, and not one of them will be everything we want it to be.

Right now, today, I’m classifying myself an existential nihilist, which, according to Wikipedia, means I believe that “each individual is an isolated being born into the universe, barred from knowing ‘why’, yet compelled to invent meaning.” It’s the ‘we are all specks of carbon in an indifferent universe’ theory. And I find it kind of reassuring. What does it mean to be the one not chosen? Maybe it means nothing. Maybe one day I will think I’m lucky because one rejection opened me up to being with someone else, someone who is kind and generous and funny, someone who is easily moved by art. Maybe I’m thinking that already.

So, right now, I am not dating someone. By which I mean I am not dating anyone, but also that I am actively spending time with someone I am not dating. It is a little strange but mostly great. Sometimes, when we are listening to music or laughing on the sidewalk, I feel an urge to reach over and grab his hand. But I don’t. Normally I might worry about this; normally I would want something well-defined to hang my expectations on. But not right now. Somehow this feels intentional in a way that online dating never has. For now, it seems good.

I don’t know exactly what it means to love someone, but sometimes I think of dating this way: I want to find someone I can survive climate change with. I want to find a face that contains a whole person within it, a face that won’t suddenly look like a stranger’s. That happened to me once—I was building furniture with a guy I was dating and I looked over and saw that he wasn’t himself. The domesticity of our task felt so important—I wanted to love this person who would build things with me—but there we were hunched over an Ikea how-to brochure on a hot summer night, sweating and frazzled, and suddenly he looked different. And he kept looking different for a couple more months until we broke up.

Most of the time I don’t believe our lives have inherent meaning. But then sometimes I am, without warning, cut to the core by the beauty of living. At my sister’s wedding, for example, I didn’t care what might happen with the two guys I was dating or the fact that I was there alone. I was surrounded by people who love her—many of whom also love me—and I was high on goodwill and cheesy dance music and gold-embossed cocktail napkins. She was an anxious bride, concerned that every detail be perfect, but she’ll make a devoted partner. You can see it in the photos: they are a united front in the face of happiness and of stress.

I was, as predicted, so happy I could hardly stand it, and there is solid evidence of this in the form of many, many wedding photos in which my face is a pink, squinty mess. I am squinting my happy bridesmaid heart out. Also, in case you were wondering, my wedding speech was all about the science of love and it was a total hit. 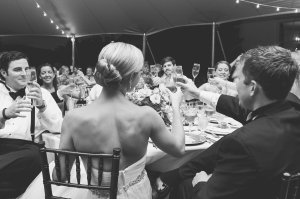 5 thoughts on “What does it mean to be the one not chosen?”