When I teach memoir writing we spend a lot of time talking about truth and Truth. Memoir, unlike some other forms of nonfiction, allows for a bit of negotiation between verifiable facts (truth) and larger, more abstract notions of How the World Works and What it Can Mean to Be Human (Truth).

Because memoir is based almost entirely on memory, things can sometimes be True without being verifiable. If I’m writing, for example, about a conversation I had with my mom when I was ten, I’m aiming to accurately capture the spirit of that conversation even if the dialogue can’t possibly be exact. But even when the class gets to a pretty good working definition of these two concepts, truth still feels a little slippery. Even in a genre nominally and practically dedicated to the investigation of truth, creative nonfiction, it still isn’t always obvious what qualifies as true. And maybe this is why I find myself increasingly resistant to notions of Truth in Love.

We throw around references to “true love” pretty casually, but what exactly is it? Seriously. I do not pose this as a rhetorical question. I’d love to know how people define true love and how(/if) they separate it from other forms of romantic love.

In my own efforts to process the idea, here’s what I’ve come up with in terms of our collective notion of true love: it happens once and with one person; it’s mutual; it lasts “forever”; it’s selfless. But when I investigate these ideas they all break down pretty quickly.

I’ve been thinking about this idea of true love as I’ve been catching up on all the Valentine’s-related stuff I ignored while on vacation last week. A lot of the criticism of Valentine’s Day (at least on my various social media streams) is that it’s too commercial. And, yeah, advertisers definitely use the holiday as a way to equate expressions of love with giving material gifts, but it’s pretty easy to reject the consumerism of the holiday while still acknowledging the sentiment. I really like the idea of having a built-in reason to tell the people you love that you love them—and of extending the celebration of love beyond romantic love. This year I spent the holiday eating mahi-mahi and drinking beer with twelve of my closest friends and I had this abundant, totally joyful feeling of love (though I acknowledge this is an easy feeling to summon while slightly sunburnt and totally tipsy and very far from rainy Vancouver.)

See what I mean?

So I don’t want to reject Valentine’s Day but I do want to rethink the concept of true love. Still, I get that it’s difficult to separate the practice of loving someone from the mythos of love. I just spent an hour listening to love songs on YouTube as I’ve been writing this and I’ll be the first to admit the mythos of love—that insistence on mystery and ineffable Truth—is seductive. I love the way I feel  while listening to John Legend’s “All of Me” and watching two improbably beautiful people make out underwater in soft-focus black and white. While I’m watching it, I have an overwhelming desire to feel that way indefinitely.

The counterpart to true love is “real love,” which tends to be a little less mystical but still annoyingly prescriptive. I know our culture will not stop suggesting what expressions of love should look like or how they should feel any time soon, but abstract notions of what’s “true” or “real” in love are my least-favorite part of Valentine’s Day.

For all my research and reflection on love, I still don’t think I can reconcile the part of me that thinks fetishizing love is destructive (because overvaluing the ineffable and the mysterious often means making not-so-good decisions—and, side note, this is one thing polyamorists do really well since they tend to reject the rigid assumptions we tie to “one true love”) with the part of me that wants love to feel profound and slightly beyond my comprehension. I’m not a scientist but I take a fairly evidence-oriented approach to the world; I like learning about the subtle forces that shape our experiences—but I also see the narrative power of mystery and not knowing.

Last week I was lying on the beach listening to my partner read me a story he’d just finished and particularly loved. He started it in bed the night before, reading until I fell asleep. And then, after we got pummeled by some giant Pacific waves (and saw a sea turtle!) he read the rest while I stretched out wet and weary on the sand. I know this is such a small thing and it probably doesn’t necessarily match up with your personal image of True Love, but it totally matches mine. I can think of almost nothing I’d rather do than lie in the sun, eyes stinging with sunscreen and salt water, and have the man I love read to me. How did I find someone who is excited about doing this—who is equally awed by literature and whose first impulse is to share it with me?? I don’t think it was fate, but it still feels profound. It feels True in the capital-T sense of the word, as in This is What Love Looks Like to Me. But of course love also looks like other things that are less romantic and much more prosaic (or even gross) as Heather Havrilesky articulates so well at the Cut. 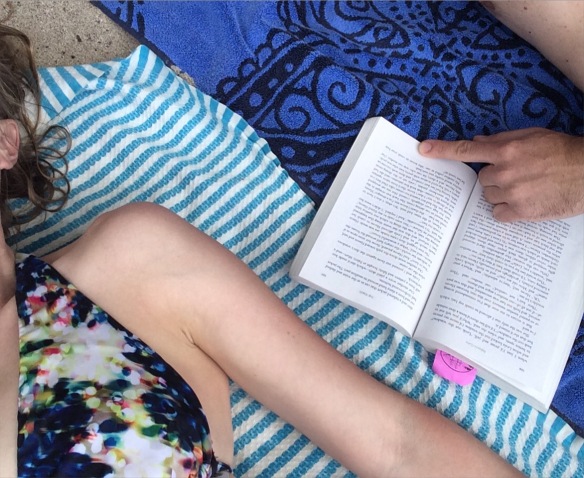 Because fetishizing romantic love has not served me well in the past, I’m much more likely to err on the side of pragmatism these days. But then I think about the research on the value of having positive illusions about your partner and I remember that too much resistance to the starry-eyed side of love doesn’t serve us all that well either. Also, feeling good for the sake of feeling good is just really nice sometimes.

Right now my favorite love songs aren’t from John Legend but Father John Misty. I Love You, Honeybear is an album about marriage that is, in turns, dark and earnest, and cynical and weird, and sexual, if not always sexy. I don’t particularly like the persona of the narrator but I like Tillman’s voice and I like his insistence on love as an incoherent experience: at once True and profound and falsely sentimental.

16 thoughts on “A failed attempt at rejecting true love”