When I was in grad school, I got a small stipend to put together the alumni newsletter. There was a guy who (twice) sent in an update about his life as a real estate agent, noting that, though his career had veered away from writing, he still used his MFA-acquired-skills to edit the community wine newsletter.

As a judgmental and ambitious twenty-four-year old, this distressed me. I was spending thousands of dollars on my degree. I had made what felt like significant sacrifices to join this program and I shuddered to imagine that a day might come where I would be content to use that expensive and coveted degree to edit a wine newsletter. For years the fear of becoming wine-newsletter-guy motivated me to put aside time to start a book, even when there were more immediately-pleasurable ways to spend my days.

As a much more pragmatic thirty-four-year old, I now understand that this guy was on to something. He surely has a nicer home than me–and earns more money. And if he’s still interested in writing, he might have the resources to take a significant chunk of time off work, or even to retire early. And there’s the obvious truth that deciding not to be a writer isn’t such a bad thing. It’s probably good! My non-writer friends report watching high-quality television shows in the evening, with no overwhelming sense of guilt about how much unpaid work they did or did not complete that day. That kind of evening sounds nice.

An eerie post-apocalyptic haze has settled over Vancouver these past few days. Forest fires north of us have turned the sky an unnatural yellow, and when the evening breeze finally stirs the air, I taste campfire on my tongue. Roscoe and I hunker down in the living room, swatting at flies and trying to determine the least unpleasant hour for a walk. At night, I wake up before dawn scratching at large red welts, tuning my ears to the mosquito’s distinct whine, wondering if it’s worth turning on all the lights and hunting the bastard down. In case you are wondering about the life of a writer hoping to sell her first book, this is what it’s like.

I guess it’s fitting that these days of waiting have the mythical qualities of purgatory. I started this book proposal in April. I thought I’d be done by the end of May. But in fact—after many revisions, false starts, one total do-over, and sixty-seven pages—I finished in the morning on Friday, July 3. And then I sat around wondering what to do. I had plenty of things that needed doing, but I’d just completed the most significant task of my short career and I found it difficult to focus on much else.

Like Joan Didion, I am “a person whose most absorbed and passionate hours are spent arranging words on pieces of paper.” On Sunday night my roommate asked me if I got more pleasure out of having completed a writing project or from having a writing project be well received. I don’t know the answer. These days of absorption are not quite pleasurable. If I am lucky, they are satisfying. More often, they are something else: hours that lurk in the shadow between indulgence and angst. I do know that each time a former graduate or undergraduate professor “liked” my Facebook status about finishing my book proposal, I felt a burst of elation. These are the writers I admired at a close distance during the years I was still figuring out almost everything about who I wanted to be.

The question we were wrestling with on Sunday—my roommate, my boyfriend, and me—was the obvious one: why write at all? What do you get out of it? Why not devote yourself to becoming a better rock climber instead? Or to making progress on the infinite list of books you’d like to read? Or to becoming a great teacher, rather than merely a good one? My answer is the same as it was when I was twenty-two and starting an MFA: I don’t know what else I could do with my days that would make my life feel as full and purposeful as writing. I love a well-organized sentence, whether it’s mine or someone else’s. And writer is the thing I’ve spent so long wanting to be.

George Orwell put “sheer egoism” at the top of a list of reasons why he wrote:

Desire to seem clever, to be talked about, to be remembered after death, to get your own back on the grown-ups who snubbed you in childhood, etc., etc. It is humbug to pretend this is not a motive, and a strong one.

Since I started this proposal, my aching desire to finish and send it off has kept me up late and away from social engagements, distracted around friends. It’s made this blog go silent. I know that, at least in part, it is not simply the desire to write, but the desire to write a book—a real hardcover document with an ISBN and an imprint stamped on the spine—that motivates me. The desire to be someone by being granted entry into the most orthodox form of publication.

So tomorrow this proposal goes out to editors—people who, just a year ago, would’ve been very unlikely to lay eyes on anything I’d written. I keep trying to remind myself of this, what a lucky position I am in. It helps me feel a bit less crazy. The worst case scenario of sending out this proposal is still much better than even the best case scenario I imagined last year: I get an audience with the best in the business.

Today I read this perfectly-timed interview with Lidia Yuknavitch. Particularly, I loved this wise response:

Do not chase your first publication to find out who you are. Be who you are and stand up inside your own intelligence and creativity from the get-go, so that no one can write your identity away from you. Guard your creative process and needs with a fury. Don’t buy the hype about yourself, ever. Don’t buy the trash-talk either. Both are projections. And this: Your first book is a micro moment on a lifelong writing journey. There is only ever the next book. There is only ever the next page. Make a writing life, one that helps others, one that respects who came before you.

In order to soothe my worrying heart, to remember that she is right–there is only ever the next page, I have done the following: taken selfies with my dog, reviewed the last three months of Taylor Swift’s Instagram feed, made popsicles, called my mom, written this blog post. My mom, who seems extra sweet and thoughtful lately, says I should celebrate every step in the process, however small, so I feel a real sense accomplishment and place less emphasis on the big-book-deal business. In keeping with this suggestion, she texted me a photo of her drinking a beer in my honor.

Like Lidia Yuknavitch, I’m hoping to spend the next few days enjoying “the endless terrains of language” and “single malt scotch” (naturally). I’m going to remember what my office-spouse Duffy said to me in March when I complained about having to find a new roommate: “I’m sorry you have everything you’ve ever wanted except a roommate, Mandy.” It shut me up quick. That’s a good friend to have. If nothing comes of this book proposal this week, I still have the pleasure of sentences and paragraphs and this rich life–which is really everything I’ve ever wanted. 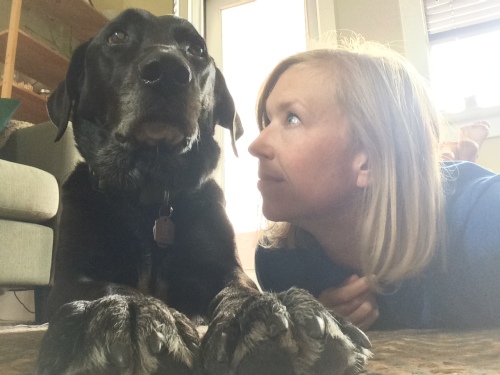 and this handsome face!