This land resembles no other place. Sardinia is something else. Enchanting spaces and distances to travel—nothing finished, nothing definitive. It is like freedom itself.

So far today I haven’t left the premises. Hostel Alghero is a series of small bungalows with a central espresso/wine/Fanta bar and a tiled patio. I sit in the same white plastic chairs that adorn patios in Vancouver. I wonder which countries, if any, don’t have these chairs. Inside, the only noise is the TV that plays pre-MTV-era music videos: Queen and Stevie Wonder and David Bowie. There’s a dusty pool table pushed against the wall, some dorm-style tables, a chess board with no apparent pieces. Siesta is running long today.

I planned to get to the beach but a lingering mirto headache has slowed my progress. Mirto is a digestivo—an after dinner liqueur—made from myrtle berries. It tastes bracingly medicinal, like high-end cough syrup—with the same consistency. The Sards serve it straight from the freezer. It’s weird at first, but it grows on you quickly, especially when a glass appears without you asking or really even noticing how it arrived. It seems the line between the recommended amount of mirto and an excessive amount mirto is a fine one. 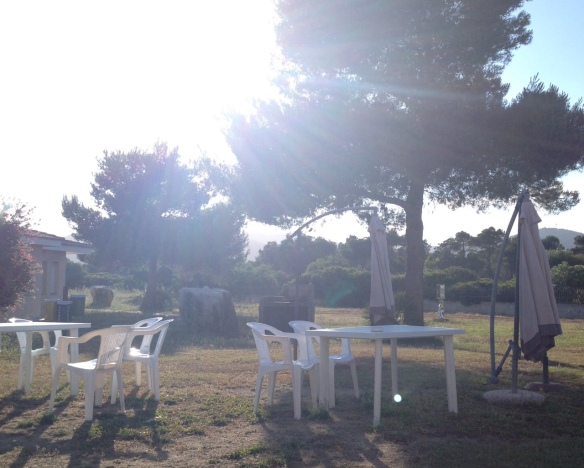 I sit on the patio and watch people come and go. And I write. It’s hot still at a quarter to six, but the breeze is stiff and cool. I’m sharing the hostel with my friend Kirsten’s geology field school and as the students filter in from the airport, their loud American voices seem to hang in the air. Some have already been down to the beach or to see the cow that’s slowly rotating on a spit in downtown Fertilia—an area that’s exactly two blocks long and one street wide. They put  up the cow last night as we walked home from dinner. A veal roast, they said, but this beast appears fully grown. We watched them build up the fire from a heaping mound of logs in the street. The musculature wrapping around the bones was deep red and white, as vivid as any classroom anatomy poster. But this cow is spread eagle and pierced sternum to pelvis with a ten-foot steel pole. One end of the spit has been slung to a crank with a bicycle chain.

The camp faculty have talked me into giving a lecture on academic writing and in exchange have plied me with salami and Vermentino. I am certain I’m getting the better end of the deal. It’s such a pleasure to chat about teaching over smoked ricotta and late night mirto. It feels, in fact, like I’ve fallen into someone else’s rhythm, a space that doesn’t, or shouldn’t, exist. Still, it suits me to settle in somewhere.

Everyone asks about my book, which provides good practice pitching it. The faculty tell students not to bother me, then they sit themselves down at my table with a bag of cookies and a jar of Nutella. But I like their company and work is progressing, despite having to reorient myself after only a week away from writing. It’s hard to believe it was only a week. Vancouver life feels far away. I look in the mirror and it takes a moment to see myself there. My face is freckled and my hair is fuzzy and light around the temples. Impossibly, the dimensions of my face seem different.

The biggest success since I’ve been writing full time—just over a month now—has been discovering that I can in fact write all day. When I get stuck, I simply stop thinking about what I can’t do and move on to another task. This may be the most boring and common-sense revelation I’ve ever typed, but it is, to me, a revelation nonetheless. I actually possess the resources required to shift my focus away from the fact of being stuck.

There is almost always something I can do, something I can push through to, some way to creep up on my daily word count. Knowing this has fundamentally changed the way I write. It’s also kept me away from this blog, as there’s always something more immediate waiting. Though it’s still tenuous, I practice putting a little faith in the fact that, if I keep at it, I will get something done every day. This is astounding to me. And unlikely to last. But for now I’ll push it as much as I can.

The biggest challenge here is posed by the rocks just down the road. I found a copy of DH Lawrence’s Sea and Sardinia in the apartment where we stayed last week in Alghero. It was the only book written in English, which I retreated to after discovering that, after several weeks of practice, I still can’t even read kid’s stories (Il brutto anatroccolo totally stumped me) in Italian. The introduction tells me that though Lawrence settled on Sea and Sardinia for the title, his real obsession was not with the sea but the island’s ubiquitous granite. For me, it’s limestone, though I’d prefer climbing it to writing about it. 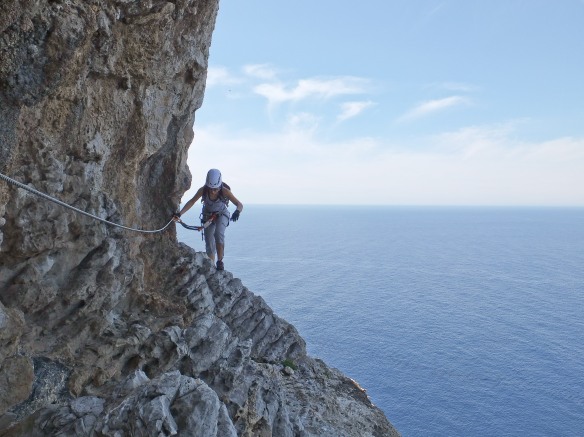 The via ferrata on Capo Caccia.

It’s difficult to derail the train of thought that goes like this: When will I be in Sardinia again? If I don’t climb now, while I’m so close, when will I ever? When will I trek to those remote eastern beaches, which will seem far more remote from my living room in Vancouver? I remind myself that, though I love to climb—though some of my very favorite days ever were spent on Mediterranean limestone—it isn’t why I came here. Here I can maximize my writing days in a way I can’t in Vancouver. In Sardinia there are no errands to run and no dog to walk, no social activities more pressing than a glass or two of wine on the hostel patio in the late Italian evening. I don’t deliberate over what to wear or what to eat. I don’t cook beyond throwing some salami and fontina on a roll, peeling an orange. It’s just what I had in mind. Or, thanks to the good company, maybe a bit better.

The group tries to tempt me to postpone my flight and travel with them to the mountains where, they swear, I can sit by a gently rolling stream typing away on my draft while baby cinghiale (Sardinia’s wild boars) run by. Though I don’t know what it would cost or how I’d get back to the airport or what I’d do with my dog or if I have it in me to cancel the plans waiting for me in Vancouver. They say I’m more likely to reach my deadline here, and maybe they are right, but I’ve got 33,000 words—eight chapters—which feels like a solid start. There is the voice again, the one that says, When else will you be offered a trip around Sardinia? And even if such an opportunity were to fall in your lap a second time, when else will you be so free from obligation that it’s genuinely feasible? These are difficult questions. They remind me that, though I want to be the kind of person who can just drop everything for a (real) good offer, I might not be. I have birthdays to celebrate, a race to run, people to see, a class to plan. Even Lawrence, though he somehow wrote a full-length book about it (and a memoir no less!), was only on the island a few days.

Now the light is angling across the patio, chasing the last vestiges of shade into the corners. I might do some yoga or guzzle another liter of water. I might go into town and see if I can sample the cow on the spit. Tomorrow I’ll walk into Alghero, the port town just down the coast. I’ll have gelato. I’ll write at a table with an umbrella and drink a Fanta. Or maybe I’ll head to the beach for an hour with my Best American Essays. I don’t know. It’ll be nice, though, I’m sure.